I’m going to give this a try. I must admit, the format of the blog makes writing feel very exposed! Hope you’ll all forgive my argumentative meandering.

I recently received a document with feedback from a double-blind review of an article I wrote about sexuality in music. The author of the document took issue (and this wouldn’t be the first time I’ve received this feedback) with my curation method, the way I selected certain musical works for analysis, writing of musical semantics:

“analysts cannot speak for the composer’s presumably ‘hidden’ intentions in the structure of a certain composition (unless there is a coherent and comprehensive utterance of a composer him-/herself about a certain piece of music other than some meager paratext such as the title of the work” (emphasis added).”

I made no such claim about the works’ titles, but I presume because the pieces all shared sexually suggestive names that it was fairly obvious this was my first entre into their context and content. Ruha Benjamin’s (2019) Introduction poses one of the most compelling explications to the question, “what’s in a name?”

“What’s in a name? Your family story, your religion, your nationality, your gender identity, your race and ethnicity? What assumptions do you think people make about you on the basis of your name? What about your nicknames – are they chosen or imposed? From intimate patterns in dating and romance to largescale employment trends, our names can open and shut doors. Like a welcome sign inviting people in or a scary mask repelling and pushing them away, this thing that is most ours is also out of our hands.” (PDF 11, 2 in print)

Especially in the context of electronic music, where sounds are often “captured” in recording or “produced” and “processed” to sound as though they were, music’s many names can say much about what the music means in a social sense. Where my anonymous reviewer determined that bias lingered in my mere attention to “some meager paratext,” this paratext, as Benjamin shows, takes agential status when released out into the world—whether supplied by the composer/author themselves or otherwise, the music’s status is affected by its titular reference. Where, for Benjamin, a person’s name fundamentally changes the person (inside and out), formal musical analysis usually presumes the immovable stasis of “the musical work” once it is committed to record, either in notation or to recorded sound. This would be the same inanimacy attributed to robots and algorithms, where one assumes robots cannot exhibit prejudice or racism. In this regard, Benjamin quotes from linguist John McWhorter, who writes in Time magazine: “[m]achines cannot, themselves, be racists. Even equipped with artificial intelligence, they have neither brains nor intention.” Benjamin qualifies his qualms, “But this assumes that self-conscious intention is what makes something racist” (Benjamin 2019, PDF 64). This is to say that intention does not always factor into racialized consequences, whether the composer chose to write erotic music does not ensure that listeners will become aroused by the music (if that is the intention), certainly; however, that the composer has composed with certain intentions inevitably influences the music’s reception, whether agreeably, as reactionary, or simply with indifference. The music “itself” may not have sexual agency, but this lack of clear intention does not let the music off the hook to be anything we want it to be.

We find links between Benjamin’s proposition regarding names and their invention (or perception thereof) and Philip et al’s (2012, 13) provocation of what, among those who study technology, constitutes as novel or innovative. In Benjamin’s account the blandness or “blank”-ness (to use Dutch nomenclature (Pieters 2018)) attributed to white majoritarian names, contrasts with the difference perceived primarily when a name is flagged as somehow other, exoticized, as exclusive. To return to my earlier example, music is just music unless it is flagged as other, for example, when given a name like Sonata Erotica (1919, Erwin Schulhoff) or “eye fuck!” (1992, Pauline Oliveros). Distinctly from instances of difference imposed on humans, the disembodied objectivity (by which I mean object-ness) of technology situates innovation in direct correlation to capital, most obviously financial but also cultural. For example, when, as agriculturalist Sarah Taber suggests, the MIT Media Lab invented a “food computer” that had already been invented (Figure 1) in order to funnel finances from well-known sexual predator, Jeffrey Epstein (Figure 2) (see also Gluckman 2019). 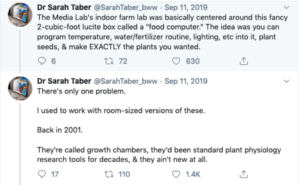 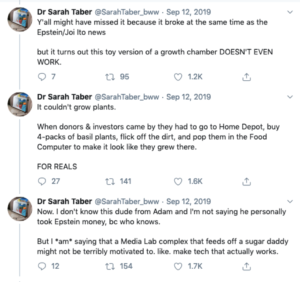 In actuality, as Taber points out, MIT Media Lab’s “invention” was an updated concept of hydroponics, stemming from the ancient “hanging garden” supposed to have first been developed in Babylonia circa 600 B.C. The notion of the inaccessible “‘black box’ that typically conceals the inner workings of socio-technical systems,” as Benjamin (PDF 40) writes, is one way to understand how MIT could get away with reinventing already existing technology—and technology that is widely used at that—since the Lab’s scientists used deliberately obtuse technological jargon to unveil the project while simultaneously veiling its inner workings.

If we envision musical syntax as a technology and compositions or improvisations as “inventions” in the sense above, we might easily think of the musical representation of such agricultural developments in Schoenberg’s Book of the Hanging Gardens, Op. 15 (1909). Schoenberg’s music was at first extremely popular, by the turn of the century his music was, we might say, in relatively high demand. But the composer was less than pleased that the cosmetic (surface-level, or “thin”) aspects of his music were so widely appealing, audiences were merely listening and not intoning the necessary “deep” structure of the composition to fully comprehend his work. Leaning into scientistic obfuscation, Schoenberg once quipped: “this was the time when everybody made believe he understood Einstein’s theories and Schoenberg’s music” (Schoenberg 1975, 51). Soon Schoenberg “invented” new methods of composition (really they were developments on existing practice (Boulez 1968)), to drive away those listeners who were not dedicated enough to keep up. His music, therefore, became like a “black box,” growing more and more difficult for contemporaneous listeners to comprehend.

In the same article, “How One Becomes Lonely,” Schoenberg refers to the “shock” audiences encountered with his Third String Quartet, Op. 30 (1927). The Hanging Gardens emerged in the midst of this compositional transformation. Reviews from this time, notably by H. H. Stuckenschmidt, dismissed the piece as “unanalysable dissonance” (Domek 1979, 111). Michael Cherlin’s analysis of Hanging Gardens shows that Schoenberg deliberately leaned into these obfuscations, for example, when setting Stefan George’s text, Schoenberg “omitted sixteen poems out of the complete thirty-one-poem sequence. The omitted poems, the first ten and the final six, are those with the most explicit narratives” (Cherlin 2007, 185), such that aside from novel musical syntax, the narrative development was also disrupted.

Looking back, we now understand Schoenberg’s atonality and his twelve-tone approaches to composition as central to “mainstream music theory’s” core subject-matter for many years, “mainstream music theory” often reduced to divided interests between “Schenker and sets” (Maus 1993, 267). Such that, although by design music theorists aim to elucidate music’s inner workings by expounding compositional techniques for all to see (Lochhead 2006), many times the venues for publishing music analysis are in and of themselves shrouded from a readership beyond the academy.

Metaphorically speaking, it’s easy to find correlations between modern agricultural improvements and the common trope of “organicism” advanced in Schoenberg’s approach to musical composition (Neff 1993), both finding their beginnings in a seed that develops into a tangled mess of vines, reaching every which way, no discernable origin to be found. Because of the way vines grow hydroponically, suspended in air, it is as if they grow indefinitely, with no front or back, no start, no end. In this regard, we might remember Deleuze and Guattari’s (in)famous “rhizome,” it, too, masquerades as a “becoming,” never having become—I say masquerades, because in all their theories of “becoming-minoritarian” and “becoming-woman,” there is no becoming man, since man is, after all, the seed (Deleuze and Guattari 2007; Jardine 1985, 216; I develop this analysis further in Sofer forthcoming). This is to say that, in theory, a non-teleological understanding of technology may become increasingly attractive—a theory known by other words as technological determinism. In order for something to appear self-standing, certain assumptions must have been made.

Anti-racist or “race critical code studies” (Benjamin PDF 35) seek to push back against the libertarian notion of technological determinism, that technology is somehow moving without humans or at least out-pacing humans. The field of inquiry coined by Benjamin seeks to combine “STS scholarship [which] opens wide the ‘Black box’ that typically conceals the inner workings of socio-technical systems, and critical race studies [which] interrogates the inner workings of sociolegal systems.” (PDF 40) Thus, the objects of study in both cases appear at first glance very far removed from music—especially musical analysis. Traditional musicological study, and its typical area of inquiry “classical” music of the European and North American traditions, has a reputation for projecting elitism, for confining its investigations to realms that require a fairly high knowledge of music’s technical workings. For example, Roger Sessions, Milton Babbitt and Edward T. Cone famously used this knowledge as evidence to justify music’s inclusion in the university curriculum (Lochhead 2015, 21ff.). Certainly, what is meant by “black box” in the context of computers is a knowledge of the system’s inner workings that only appears to be opaque to those who do not understand, perhaps similar to how Western musical notation figures as pre-existing or assumed knowledge for musicological readership. These kinds of hidden knowledges allow us to make connections between STS and music studies, as both subsist on “socio-technical systems” that are both coded and encoded with socio-cultural capital.

Sociolegal systems are, as Benjamin recognizes, also coded and enforced to favor those with the most power, capital, and, thus, privilege to influence such systems. Within music we might understand this tension between social/sociological bias and legal authority when examined through the lens of sampling, which typically has two competing discourses: (1) as historicized via its development in regards to the intellectual prestige of academic institutions (CPEMC) or radio stations (e.g., Westdeutscher Rundfunk; Radiodiffusion Française)—where “composers” were attributed with individualistic pioneering status even when collaboration was ubiquitous (Born 1995; Iverson 2017; 2019); versus (2) the increased litigation facing rappers, R&B and hip-hop artists from the 1980s onwards (Rose 1994; Williams 2013; Katz 2010). Though both groups may have used the same technology, the framing of technological utility in each case is beholden to sociological concerns that, in the first case, pardon an innovator in the name of science, while, in the second case, implicate an offender of the law.

Katz, Mark. 2010. “Music in 1s AND 0s: The Art and Politics of Digital Sampling.” In Capturing Sound: How Technology Has Changed Music, 146–76. Berkeley, CA: University of California Press.

Neff, Severine. 1993. “Schoenberg and Goethe: Organicism and Analysis.” In Music Theory and the Exploration of the Past, edited by David W Bernstein and Christopher Hatch, 409–34. Chicago : University of Chicago Press. http://archive.org/details/musictheoryexplo0000unse.

This site uses Akismet to reduce spam. Learn how your comment data is processed.

This site is part of Humanities Commons. Explore other sites on this network or register to build your own.
Terms of ServicePrivacy PolicyGuidelines for Participation
Skip to toolbar